Jurgen Klopp hailed Roberto Firmino as the “heart and soul” of his Liverpool side, but could only offer a non-committal “we will see” on the striker’s future.

Firmino is into his eighth season as a Liverpool player, but as he stands, it will be his last.

The Brazilian has 12 months remaining on his contract and, no longer a first-choice starter, there is a chance he departs on a free transfer next summer.

There have even been claims over a move to Juventus before the end of the transfer window, though journalists on Merseyside have denied reports of a £19 million deal.

Speaking ahead of the Community Shield against Man City, Klopp was questioned on the future of his No. 9, and though full of praise and clearly planning around him for 2022/23, he could not confirm that Firmino would stay beyond this season.

“Bobby is crucial for us. Bobby is the heart and soul of this team. The way we played in the last few years was only possible because of Bobby,” he told reporters.

“That’s why I’m really happy that he could train the majority of the time here in pre-season so far.

“Everything looks really good. I’m absolutely fine, for me there is no doubt about his quality.

“All the rest, we will see how this year goes. But yes, he is essential for us.” 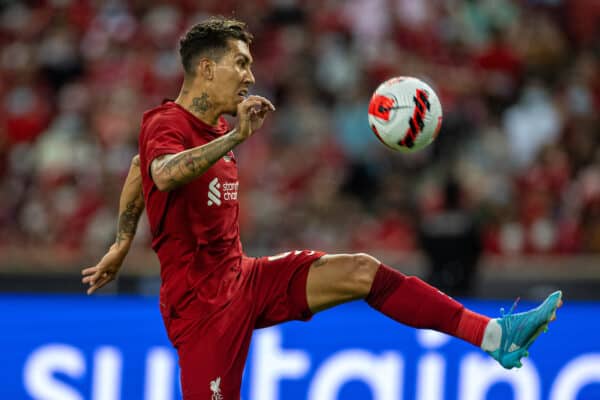 Firmino is expected to start ahead of Darwin Nunez on Saturday at the King Power, with the £85 million signing still adjusting to his new team-mates and vice versa.

With Diogo Jota still sidelined, too, there is a chance that Firmino can make his mark again in these early weeks of the campaign.

Whether that translates to a new contract for a player who will turn 31 in October, though, remains to be seen.