TOM Hanks told fans to “back the f*** off” as he rushed to protect his wife Rita Wilson after one nearly knocked her down.

The Hollywood legend yelled at the crowd as the couple were mobbed by fans outside a restaurant in Midtown, New York City.

Tom and Rita were caught on video leaving the restaurant when suddenly a large group of people began to swarm towards them.

One overzealous fan then charges in, appearing to be holding a pen for an autograph and a Wilson football prop from Hanks’ movie Castaway.

The man wearing a baseball cap and sunglasses then appears to accidentally barge into Rita from behind – shoulder shoving her in the back.

Rita screams and loses her footing – but manages to stay standing as she shouted “stop it” and held up her hands. 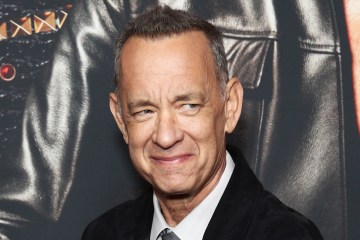 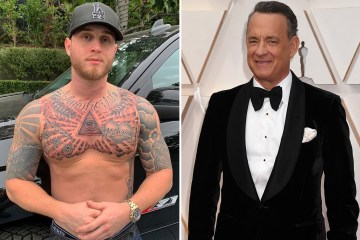 And then the Forrest Gump star turned to the crowd after checking on his wife and yelled: “That is my wife. back the f**k off.”

Oscar-winner Hanks appears to push the fan back and holds up his hands to the crowd in an attempt to calm the scene.

“Knocking over my wife?” he says, looking very frustrated and exasperated as he stares at the gathered group.

Hanks and Rita are then ushered away by security into an awaiting vehicle, as one fan shouts “sorry about that Tom.”

Another person in the crowd remarks, “come on, man” and one adds “what are they doing out here?”.

Tom and Rita had grabbed dinner together after attending a screening of his new movie, Elvis.

He has been engaged in a whirlwind worldwide publicity tour for the new movie.

The couple first met on the set of ABC’s sitcom Bosom Buddies in 1981.

They became firm friends, and reunited once again on the set of John Candy comedy movie Volunteers four years later in 1985.

Rita is an actress and singer who has appeared in movies such as Sleepless in Seattle and Jingle All the Way.

She also works behind the scenes, being executive producer on ABBA movie Mamma Mia! and its sequel Mamma Mia! Here We Go Again.

After he separated from his first wife Samantha Lewes in 1987, Tom and Rita got together and wed in 1988.

Speaking about their marriage, Tom told US Weekly in 2019: “We got married, we committed to each other, we love each other and we work hard at our relationship.

And meanwhile, Rita told Piers Morgan in 2012 about one of their sweetest moments as a couple.

She said: “We were holding hands, and we were waiting for the traffic light to change.

“And he looked at me and he said, ‘You know, I just want you to know, that you never have to change anything about who you are in order to be with me’.”

And the spirited defense of his beloved wife will help dispel concerns from fans about his health.

Video which emerged yesterday appeared to show the 65-year-old trembling as he spoke at the premiere of Elvis.

The actor could be seen clasping the microphone as he spoke and joked about booze.

He appeared to shake as he spoke to the crowd while on stage in Gold Coast, Australia.