WILL THIS MAKE IT MORE EXPENSIVE TO BUY A HOME?

One of the sectors the Fed has been watching closely is the interest-rate sensitive housing market, where prices have risen 38 percent since the start of the pandemic.

The surge has been driven by low borrowing costs, put in place by the Fed to cushion the economy from the COVID-19 pandemic, meeting an upsell in demand and a shortage of properties for sale.

Worse is set to come, Pointon says, with mortgage rates probably not peaking until the middle of next year.

Mortgage rates were steadily dropping after the pandemic hit in 2020. They were low before soaring in 2021, hitting 5 percent in May 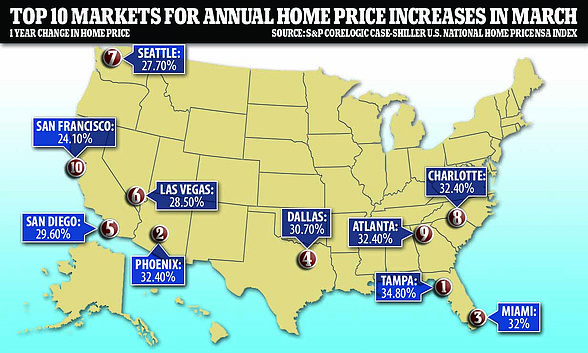 US home prices showed no signs of cooling off as the biggest shifts in mortgage rates came in March. The map above shows the top 10 cities for home price increases out of the 20-city composite index

If mortgages hit seven percent it means that for the average person trying to purchase a $400,000 home with a down payment of $10,000, they would be stuck with a $2,913 mortgage payment after the rate hike, a significant jump from the $2,730 before the increase.

And as mortgage rates soar, demand for homes are plummeting as real estate brokerages Redfin and Compass both announced layoffs on Tuesday.

‘Mortgage rates increased faster than at any point in history,’ Redfin CEO Glenn Kelman said in a statement. ‘We could be facing years, not months, of fewer home sales, and Redfin still plans to thrive.

‘If falling from $97 per share to $8 doesn’t put a company through heck, I don’t know what it does.’

David Wood, who recently sold his $2.6 million home in South California, said he had gotten 93 groups visiting the house in one weekend alone, with seven people willing to pay above the asking price.

Preparing to move to New Jersey, Wood commented that there was little inventory for housing and that he had to compete among several others for a $2.5 million estate in Little Silver, with his cash offer being what helped him beat out the rest.

‘There’s so much competition for housing, it’s hard to find a home no matter who you are,’ Wood said. ‘Houses I was looking at would be off the market in three days.’

Real estate consultant Jonathan Miller, who prepared Douglas Elliman’s latest report on median rent in Manhattan hitting an all-time high of $4,000 per month in May, said the hike will have a direct impact on rent.

Miller said that as mortgage lending remains tight, there are fewer people able to qualify for homes in the suburbs around major cities who have been forced to join the pool of apartment hunters in New York City, Miami and Austin.

According to Redfin, the average rent in Austin had shot up to $2,245 in January 2022, a 35 percent spike over the last year, and Realtor.com found Miami’s average rent has shot up to nearly $3,000 in March, a 58 percent increase in the last two years.

Jacob Channel, a senior economist at Lending tree, said the market has become so wild, it’s become increasingly harder to predict what mortgage rates will be.

‘Given that they’ve already gone up so dramatically, it’s difficult to say just how much higher mortgage rates will go by year’s end,’ Channel told CNBC

WILL MY CREDIT CARD COSTS GO UP?

If you’ve got outstanding loans without fixed interest rates, the answer is a simple, yes. Though the Fed doesn’t control what banks or car dealers charge for such loans, credit card rates and auto loans typically rise when the Fed’s policy rate does.

Household debt has been rising rapidly, with consumer credit up more than 8 percent in the first quarter to $1.5 trillion, a recent Fed survey showed.

The hike will also play a major role in people’s ability to pay off debt, as the average interest rate on credit cards jumped to more than 19 percent.

The average American has about $6,000 in credit card debt, according to Experian Consumer Credit, with the new interest rates, consumers would have to pay $349 a month to pay off the debt in 24 months, a slight increase from $346 before the hike.

Ted Rossman, senior industry analyst at Credit Cards.com, said because interest rates vary from credit car to credit car, Americans will see a wide range of differences in their debt.

‘If the APR on your credit card rises to 18.61% by the end of 2022, it will cost you another $832 in interest charges over the lifetime of the loan, assuming you made minimum payments on the average $5,525 balance,’ Rossman told CNBC.

WHAT ABOUT MY AUTO LOANS AND STUDENT AND PERSONAL LOANS?

The interest needed to pay back on auto loans will see a modest increase.

Although the interest will go up, auto dealers tend to be more sensitive to the competition, and through five-year financing, the monthly payment interest will likely go up by on $7 for most Americans.

Student loan payments will also see a boost as prior to the interest rate hike, an average loan of $28,400 would become $37,494 in ten years.

Even personal loan repayments will see a similar increase. A personal loan has an average 20.06 percent interest rate, according to Nerd Wallet, so to pay off a $10,000 loan in five years, consumers would have to spend $15,916.37.

Instead, banks tend to capitalize on a higher-rate environment to try to thicken their profits. They do so by imposing higher rates on borrowers, without necessarily offering any juicer rates to savers.

But while interest on loans continue to soar, savings accounts are expected to rise from an average 0.07 percent to 0.08 percent.

Greg McBride, chief financial analyst for Bankrate.com, urged Americans to seek out better accounts soo while they interest is going up.

‘If you have money sitting in a savings account earning 0.05 percent, moving that to a savings account paying 1 percent is an immediate twentyfold increase with further benefits still to come as interest rates rise,’ McBride told CNBC.

If you’re invested in mutual funds or exchange-traded funds that hold long-term bonds, they will become a riskier investment. Typically, existing long-term bonds lose value as newer bonds are issued at higher yields.

WILL THIS BRING DOWN THE COST OF LIVING?

In short, no. That’s one of the difficulties the Fed is facing. By raising rates it can cool demand in the economy by making borrowing costs more expensive, nudging consumers and businesses to curb spending, but it can’t do anything about supply shocks.

Economists thought March was the peak for consumer price hikes, but the rate spiked again in May, jumping 8.6 percent in the latest 12 months, and wholesale prices surged as well, almost entirely due to soaring costs for energy, especially gasoline.

US gasoline prices have topped $5.00 a gallon for the first time ever last week and are setting new records daily.

Meanwhile, the price of groceries have gone up significantly in the past year due to inflation, with the price of bacon up 15.3 percent, eggs up 32.2 percent and milk up nearly 16 percent.

Air travel prices have gone up 37.8 percent in the last year, and new car prices have also seen a jump of 12.6 percent.

Fed Chair Jerome Powell had indicated policymakers were poised to implement another half-point increase in the benchmark borrowing rate next month, aiming to douse the red-hot inflation without tipping the economy into recession and avoid a bout of 1970s-style stagflation.

President Joe Biden has fully endorsed the Fed’s battle against the steepest rise in prices in more than 40 years, as he watches inflation erode his popularity and deflect attention from other milestones, including a rapid recovery of the world’s largest economy and record job growth.

WHAT ABOUT MY RETIREMENT FUND?

Stocks plummeted in the days leading up to Wednesday’s rate hike as investors worried that sharply tighter monetary policy would drive the US economy into recession, if not this year then next.

In the past five days, the Dow Jones as been down more than 2,000 points, or 6.29 percent, but stocks saw a notable rally following the Federal Reserves’ announcement on Wednesday afternoon, shooting up more than 400 point by closing.

What happens to stocks in coming weeks and months will depend a lot on whether investors believe the Fed will be successful in reining in inflation without cratering growth.

A good read on that may require another several months of inflation and other data, says State Street’s Marvin Loh.

The volatility in the markets also extended to cryptocurrency investments as Bitcoin fell this morning to a new 18-month low as the recent tumble in crypto markets showed no sign of letting up.

Traders are nervously watching to see if it breaks below the $20,000 benchmark.

COULD THE FED RAISING RATES IMPACT MY JOB?

By raising rates high enough to decisively dent inflation, the Fed will at the very least spark a period of slower economic growth. But investors are skeptical the Fed can achieve its aims without inducing a recession, often defined as two consecutive quarters of negative growth.

Fed policymakers think they may yet be able to avoid a big spike in firms laying off workers.

That’s because, the thinking goes, the unemployment rate is currently 3.6 percent, low by historical standards, and there are almost two job vacancies for every worker, so firms could conceivably cut back on job openings without cutting actual jobs.

But many do worry. ‘If our monetary policy brings about a slowdown of the economy, we’re all going to pay the price,’ Groundwork Collaborative executive director Lindsay Owens told activists gathered this week across the street from where Fed policymakers were meeting in Washington.

One policymaker, Fed Governor Christopher Waller, recently commented that if the Fed could keep the unemployment rate from rising above 4.25 percent in pursuit of getting inflation back to the central bank’s 2 percent goal, it would be a ‘masterful performance.’