Kostas Tsimikas’ preparations for the new season only began last weekend, but one young Liverpool defender has already caught his eye.

The Greek international, like the majority of his other teammates, played 30 minutes in the Reds’ defeat to Man United in Bangkok on Tuesday.

The player who started the game in his position was Luke Chambers, the 17-year-old left-back who looks set for more involvement with the first-team this season.

Chambers featured for England under-19s as they won the European Championships earlier this summer and was name-checked by Pep Lijnders as a player he wanted to see take his opportunity in pre-season.

Judging by Tsimikas’ comments, Chambers is doing exactly that, as the Reds continue their preparations for 2022/23.

“This kid impresses me a lot. He’s a very, very good player and always very focused in the training,” Tsimikas said of Chambers to liverpoolfc.com.

“For me, my personal advice for him is to never stop dreaming and never stop working hard, because in football that’s the most important [thing].

“I’m really sure the future is bright for him.”

As one of the under-23’s star performers last season, there’s every chance Chambers will be training with the first-team on a more regular basis, especially after 19-year-old left-back Owen Beck completed a loan move to Famalicao earlier this week.

Meanwhile, Tsimikas himself is hoping to build on an impressive 2021/22 campaign, which saw him play a vital role in the Reds securing a domestic cup double. 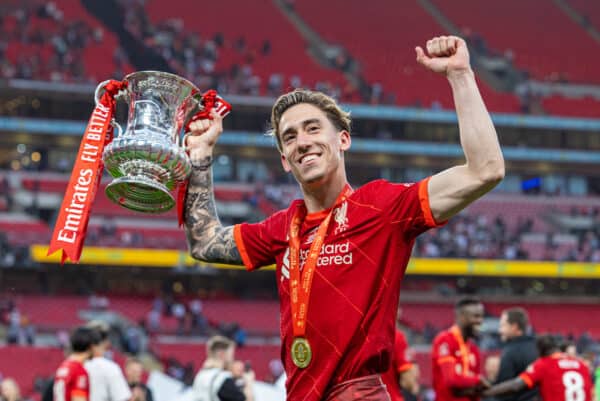 The Greece international scored the winning penalty in the FA Cup final and was an able deputy to Andy Robertson when called upon.

“Of course, OK, there’s the team also,” Tsimikas said when asked if last season was one of the best of his career so far.

“Always, as I’ve said a lot of times, I enjoy to play with my boys here; my family.

“The first season for me was not so good – or as I expect – but the second year I say [that] I had to work even harder if I wanted to reach my goals and hopefully, I had no injuries.

“All the games I played I really enjoyed a lot.”