Manchester United manager Erik ten Hag will launch an effort for Inter Milan’s Denzel Dumfries if he can move Aaron Wan Bissaka on this summer.

That’s according to Gazzetta Dello Sport, who say the Dutchman ‘dots on’ the full-back after his performances last season.

The newspaper explains that because of his ‘timing and physicality’Dumfries has admirers in England, with the Premier League demanding both traits from players.

They say that one of his ‘creative compatriots’Erik ten Hag, has taken residence up at Old Trafford, and that could lead to Dumfries making the switch.

If Manchester United were able to move on Wan-Bissaka, they would be ‘ready to make an offer’ to Dumfries as a replacement.

Inter Milan value the defender at €40m and have already spoken about a transfer this summer, albeit with Chelsea during the negotiations over Romelu Lukaku. 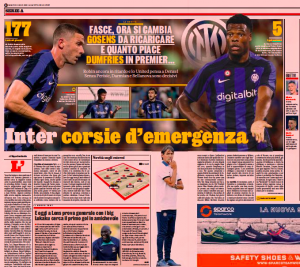 If Milan Skriniar were to stay at Milan, rather than joining PSG, Dumfries is the player they could cash in on, perhaps before next summer when he will be in the final two years of his deal.

The directors in charge at Inter have accepted this and would ‘certainly not object’ should ‘the right check’ arrive on their table. Whether that would have to be €40m straight up or they’d accept a deal worth as much overall isn’t made clear.

Either way, any move from Manchester United depends on them being able to shift Wan-Bissaka out first.