KATE Middleton wowed in polka dots today as she and Prince William joined racegoers at Ascot.

The Duchess of Cambridge looked effortlessly elegant as she led the Royal procession with the Duke of Cambridge in Berkshire on Friday afternoon.

The beaming couple have not attended Royal Ascot since 2019 and waved at cheering onlookers as crowds in the parade ring caught a glimpse of them.

And Kate, 40, was later left open-mouthed with joy when she appeared to pick a Royal Ascot winner.

The Duchess looked at a guest in the royal box in shock after Perfect Power won the Commonwealth Cup and William came over to his wife grinning.

The couple shared a few more glances before they disappeared, presumably for the royal to collect her winnings. 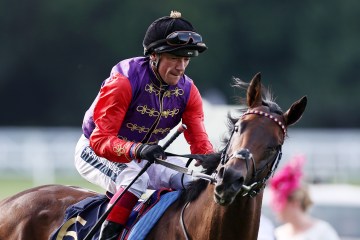 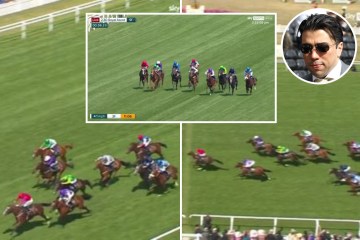 The Princess of Wales wore a similar outfit to Ascot in 1988, while Wills today smiled through the heat, donning a suit, waistcoat and hat.

The Cambridges arrived in the traditional carriage procession leading the group of royal guests but again the Queen was missing from the famous racecourse.

In the following carriage was Peter Phillips and his girlfriend Lindsay Wallace, who attended a number of events with the Queen’s grandson over the Platinum Jubilee weekend.

Most read in Horse Racing

The Queen, 96, who watched yesterday’s action on the telly from Windsor, did not attend today’s event.

It is likely Her Majesty was watching the fourth day of races from home in “her comfy clothes” – as she did when she missed Epsom Derby Day earlier this month.

And the monarch, who had two horses running today, had plenty to cheer for – despite two of her star racers being pipped at the post on Thursday’s Ladies Day.

The Queen’s hot favorite Reach for the Moon and jockey Frankie Dettori were yesterday outdone by winner Claymore.

Dettori, 51, also came second on Saga—another of the Queen’s horses—while her final entry Tactical came a disappointing seventh in the final race.

It came as tens of thousands of revellers basked in unbroken sunshine as temperatures sizzled to a blistering 29C (84F) on the racing event’s world-famous Ladies Day.

As the sun blazed on horses and racegoers alike, dozens were treated for heatstroke on the hottest day of the year so far.

One staff member said: “They were dropping like flies.”

Meanwhile, weather forecasters have warned conditions will get even hotter today.

Predicted high temperatures have meant men in all enclosures will be allowed to remove their jackets and ties once the traditional royal carriage procession has ended, usually just after 2pm.

Stephen Dixon, spokesman for the Met Office, said: “One thing we are keeping an eye on is Royal Ascot.

“The highest maximum temperature we’ve had on a day is 32.8 degrees, which is taken from a nearby station in Reading near Royal Ascot.”

He added: “It’s looking like it could be around 31 degrees in Reading today, but I wouldn’t rule out the possibility of it perhaps rising into 32, and then obviously getting closer to that record, but it’s something that might be quite close to being the hottest Royal Ascot on record.”