Juventus have made a move for Liverpool striker Roberto Firmino, with the two clubs now in an ‘advanced negotiation’.

That’s according to Corriere Dello Sport, who say the Italian giants have offered €19m to sign the Brazilian.

According to the newspaper, Juve have suddenly changed their strategy to complete their forward line and turned their attention to Firmino.

They are now very close to the Liverpool striker, with negotiations ‘developing under the surface’ in the last few hours.

Firmino has been pushed down the pecking order under Jurgen Klopp by the arrival of Darwin Nunez. That follows last season, where he was also no longer the first-choice he once was.

He needs to be playing regularly to be in Brazil’s squad for the World Cup, though, and for this reason, he has ‘Welcome the Bianconeri’s interest’. 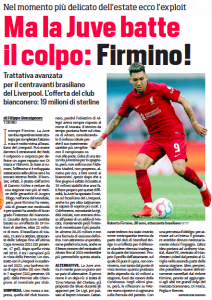 Liverpool are said to be open to a sale as Firmino’s contract expires in 2023 and Juventus are looking to take advantage of that, having shifted their sights from Alvaro Morata to the Brazilian.

Talks with Atlético Madrid for Morata have come to be difficult and it is felt that is why Firmino has now become a target instead.

Firmino is more than ready to make the switch but whether Liverpool are willing to accept Juventus’ first offer remains to be seen.