For the past few days, reports in Italy and England have covered Chelsea’s plan to make a €60m offer to Sevilla for Jules Koundé.

These claims are relayed by AS, who then then give their own take on this case. Even though the Blues reached an agreement with the 23-year-old some time ago, the report adds their new strategy of negotiating with other players ‘doesn’t sit well’ with him.

The ex-Bordeaux man was reluctant to join Barcelona until a few days ago. The situation has changed and he is now open to making a switch to the Camp Nou if Thomas Tuchel’s side [or another European great] don’t close the deal once and for all with Sevilla.

Barca have financial room to find to sign the defender. If the west London club and Sevilla can quickly agree to a deal before that, then AS state Koundé will end up at Stamford Bridge.

Xavi Hernández is the great supporter of his arrival at the Camp Nou. Barca’s economic conditions and other factors [Bayern pressing for De Ligt and Juventus chasing Koulibaly] could see the Premier League step in for Julen Lopetegui’s man.

Due to the movements elsewhere, the newspaper states Chelsea are ‘forced to speed up’ negotiations with Sevilla so that Tuchel doesn’t end up without Koundé. 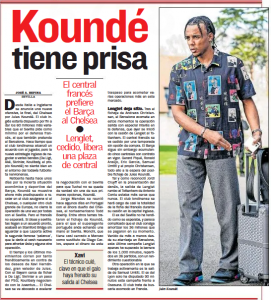 Sevilla have given a mandate to Jorge Mendes to sort out the Frenchman’s future.

A few days ago, the super-agent met Chelsea owner Todd Boehly in Portugal and the defender was one of the topics discussed by the two parties. The report doesn’t make it clear the impact of this meeting on the possibility of the player joining the Blues this summer.

Koundé is in a ‘hurry’ to sort out his future. It needs to be seen whether his next move will be to Chelsea, Barcelona or another club.