Hamilton achieved the best Saturday result of his troubled 2022 season after what he called a “disastrous” Friday when his Mercedes team tried a revised floor in FP1, which was quickly discarded.

It also came after he had just a few days to recover from the battering that his back took in the Azerbaijan GP, ​​when he struggled to get out of the car at the end of the race.

“I can’t tell you how happy I am,” said Hamilton when asked by Autosport if he was satisfied with the outcome of the difficult session.

“Me and Ang [physio Angela Cullen] had the biggest hug at the back of the garage, because we’ve both been working so hard, and then obviously this past week was a real challenge. And I’m so grateful to have her with me every day to just work through the pain and get my body right and then to come here with a car still we’re struggling.

“We know on pure pace in the dry we’re still a long way off. But to get top five in qualifying in those conditions is awesome. I think it’s my highest qualifying this year. It feels very, very similar to getting my first qualifying in Australia in 2007 in terms of the excitement.”

Hamilton’s life was made harder during the session by an imbalance between brake temperatures that he had to try to correct.

“It was difficult for everyone,” he said. “I also had big wheel separation of my brake discs. So one brake disc higher than the other, so the other one can pitching.

“So luckily I was able to fix that on the out-lap. We didn’t do like our full mode, because we were doing consistent laps. So I think there was a little bit more time in it.

“But at the end my tires were kind of up. As I was doing the in-lap I knew everyone else was on a lap and I was, ‘Ah Jesus, please!’”

Hamilton admitted that he had considered joining team-mate George Russell in a move to slick tires at the end of Q3, but he decided that the track still wasn’t dry enough. Russell spun into the barrier as he started his flying lap.

“It was definitely a consideration,” Hamilton said of slicks. “I think it was drying quite quickly. And there were definitely some points of the track which were looking to be dry. But for me, it felt too big a gamble, especially with this temperature.

“So I decided to stay on the interest. And actually I think it was the right way. I think it still needed maybe another 10 minutes maybe or so before it went to slicks.”

After his difficult Friday, Hamilton and his team made wholesale changes to the car overnight, and he now feels much more confident going into Sunday’s race. He indicated that he has opted for a lower drag rear wing than his team-mate from him.

He added: “Yesterday was really tough. Basically what happened is we’re trying like all these different things in the car, hole in the floor and all sorts. We have much, much different set-ups yesterday and we always were hoping one of them was right. And my one was not nice to drive.

“And that’s why I really struggled to be consistent with it. Then we come together at night, we share our opinions on it, and we’ve now kind of narrowed down.

“And then before qualifying we had to decide whether we take a big wing or the smaller wing for the race for a small potential gain in qualifying. That’s the direction George went, and I’ve prepared for tomorrow. So I’m hoping it’s the right one, and gives me the best race car for tomorrow.” 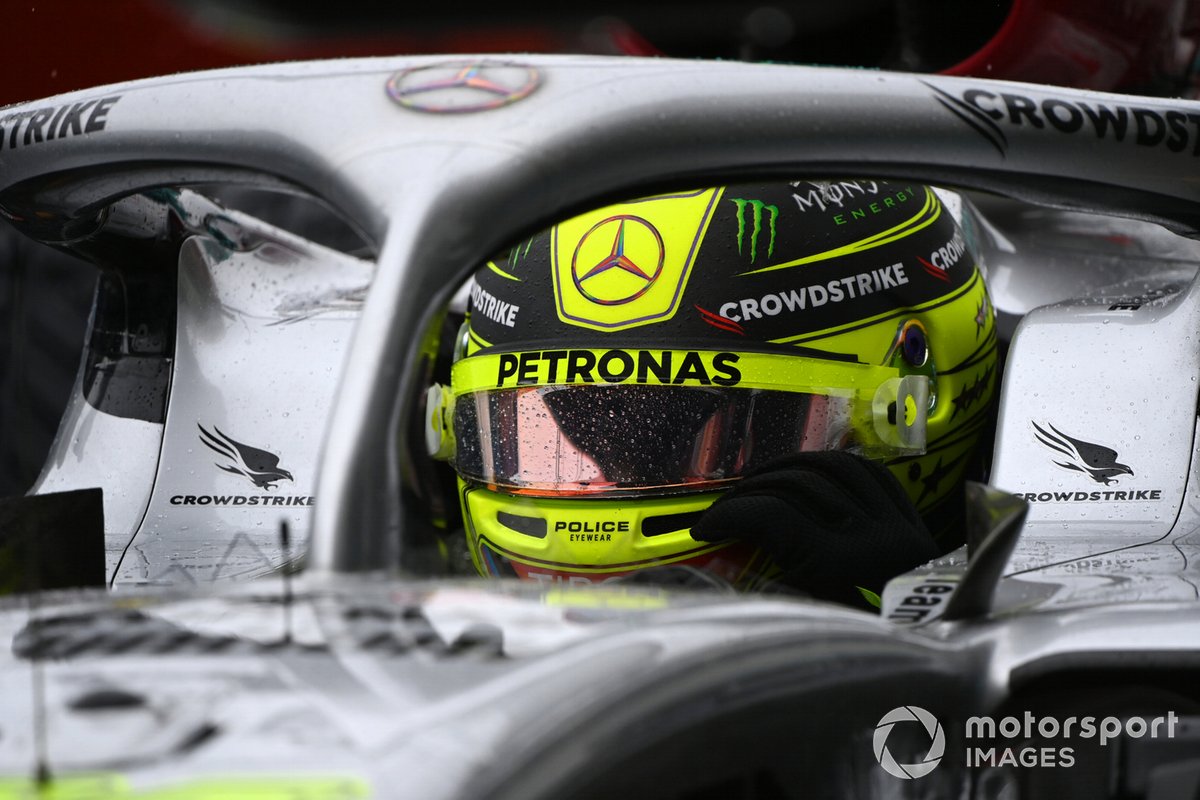 Hamilton heads into the race with a car that is very different from the one he drove in the dry on Friday, having only had the chance to sample it in the wet on Saturday. However, he has no concerns about being caught out by the changes.

“No, it’s not a step into the unknown, it’s a little bit softer, it’s should be better in roll, the mechanical balance is different, and it should be a lot better,” he said. “George is much, much happier in the direction that he was in.”

“But this weekend it’s okay we’ve come up with the rideheight, which has helped a little bit, we still have bottoming. But I’m not feeling it’s dangerous this weekend.”

Hamilton is not worried about his back being an issue in the race, and added: “I hope we don’t have the same problems as Baku. We haven’t so far this weekend. And yeah, I think it should be okay.

“My back, with acupuncture we’re still working it every day, every night, stretching. Still a little bit tight, but I made it through today and I’ll make it through tomorrow.”